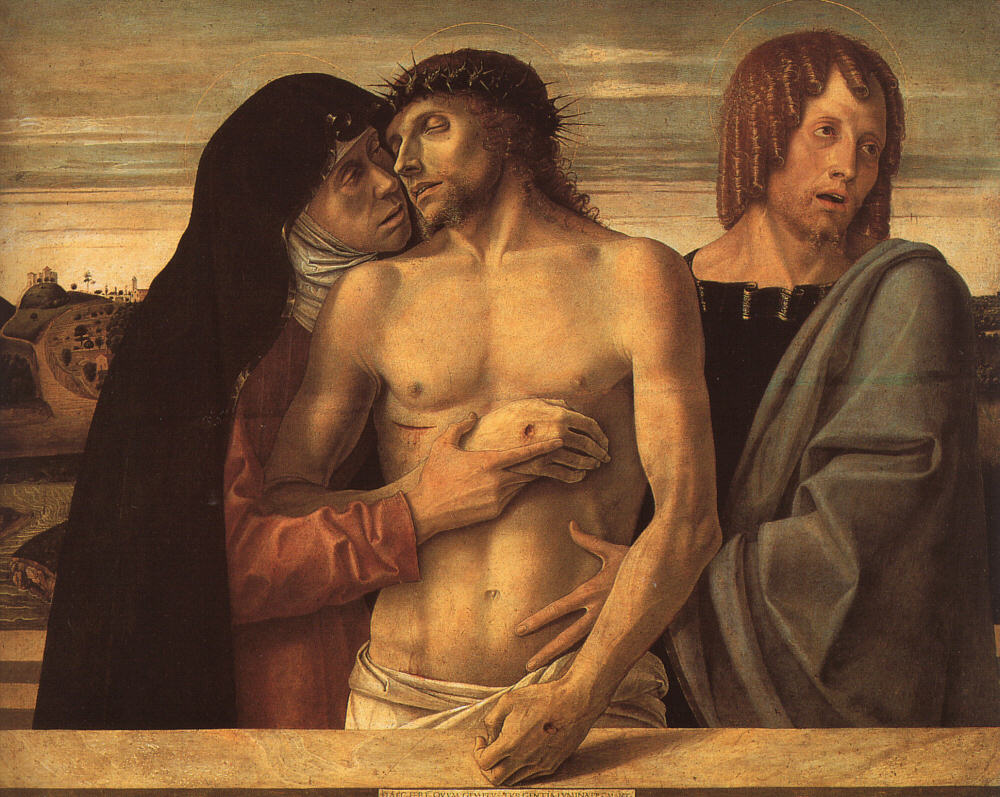 (b. c. 1430, Venice [Italy]--d. 1516, Venice), Italian painter who made Venice a centre of Renaissance art comparable to Florence and Rome. Although the paintings for the hall of the Great Council in Venice, considered his greatest works, were destroyed by fire in 1577, a large number of altarpieces (such as that in the church of SS. Giovanni e Paolo, Venice) and other extant works show a steady but adventurous evolution from purely religious, narrative emphasis to a new naturalism of setting and landscape.

Little is known about Bellini's family. His father, Jacopo, a painter, was a pupil of Gentile da Fabriano, one of the leading painters of the 15th-century Gothic revival, and may have followed him to Florence. In any case, Jacopo introduced the principles of the Florentine Renaissance to Venice before either of his sons. Apart from his sons Gentile and Giovanni, he had at least one daughter, Niccolosa, who married the painter Andrea Mantegna in 1453. Both sons probably began as assistants in their father's workshop.

Giovanni's earliest independent paintings were more strongly influenced by the severe manner of the Paduan school, and especially of his brother-in-law, Mantegna, than they were by the graceful style of Jacopo. This influence is evident even after Mantegna left for the court of Mantua in 1460. Giovanni's earliest works date from before this period. They include a "Crucifixion," a "Transfiguration," and a "Dead Christ Supported by Angels." Several pictures of the same or earlier date are in the United States and others at the Museo Civico Correr in Venice. Four triptychs, a set of three panels used as an altarpiece, are still in the Venice Accademia, and two "Pietŕs," both in Milan, are all from this early period. His early work is well exemplified in two beautiful paintings now in the National Gallery of London, "The Blood of the Redeemer" and "The Agony in the Garden."

In all his early pictures he worked with tempera, combining the severity and rigidity of the Paduan school with a depth of religious feeling and human pathos all his own. His early Madonnas, following in his father's tradition, are mostly sweet in expression, but he substituted for a mainly decorative richness one drawn more from a sensuous observation of nature. Although the pronounced linear element--i.e., the dominance of line rather than mass as a means of defining form, derived from the Florentine tradition and from the precocious Mantegna--is evident in the paintings, the line is less self-conscious than Mantegna's work, and, from the first, broadly sculptured planes offer their surfaces to the light from a dramatically brilliant sky. From the beginning Giovanni Bellini was a painter of natural light, as were Masaccio, the founder of Renaissance painting, and Piero della Francesca, its greatest practitioner at that time. In these earliest pictures the sky is apt to be reflected behind the figures in streaks of water making horizontal lines in a mere strip of landscape. In "The Agony in the Garden," the horizon moves up, and a deep, wide landscape encloses the figures, to play an equal part in expressing the drama of the scene. As with the dramatis personae, the elaborately linear structure of the landscape provides much of the expression, but an even greater part is played by the colours of the dawn, in their full brilliance and in the reflected light within the shadow. This is the first of a great series of Venetian landscape scenes that was to develop continuously for a century or more. To a city surrounded by water, the emotional value of landscape was now fully revealed.

The great composite altarpiece with St. Vincent Ferrer, which is still in the church of SS. Giovanni e Paolo in Venice, was painted perhaps 10 years later, toward the mid-1470s. But the principles of composition and the method of painting had not yet changed essentially; they had merely grown stronger in expression. It seems to have been during a voyage down the Adriatic coast, made probably not long afterward, that Bellini encountered the influence that must have helped him most toward his full development: that of Piero della Francesca. Bellini's great "Coronation of the Virgin" at Pesaro, the first Venetian picture in the full style of the Renaissance, probably reflects and carries still further in composition the ideas expressed by Piero in an unrecorded "Coronation of the Virgin," the lost centrepiece of a polyptych originally in the church of S. Agostino at Borgo Sansepolcro. Christ's crowning of his Mother beneath the effulgence of the Holy Ghost is a solemn act of consecration, and the four saints who stand witness beside the throne are characterized by their deep humanity. Every quality of their forms is fully realized: every aspect of their bodies, the textures of their garments, and the objects that they hold. As with work by Masaccio and Piero della Francesca, the perspective and the polychrome of pavement and throne help to establish the group in space, and the space is enlarged by the great hills behind and rendered infinite by the luminosity of the sky, which envelops the scene and gathers all the forms together into one. Harmony is the aim of all art, but the significance of the harmony depends upon the significance of its parts, as well as upon the degree of its intensity. Here, Bellini has provided humanity with the full grandeur of nature, and it is nature endowed with all that is religious in man. The unity achieved has an emotional warmth that is uniquely his.

A new degree of technical achievement is implied. The fact that at this point Giovanni painted mainly in oil does not completely explain his greatness. Piero was one of many Italian painters who were already using the oil medium. A legend that Giovanni ceased to paint in tempera only after he was introduced to oils by Antonello da Messina, who was in Venice in 1475/76, is without point, for much the same effects can be produced in either medium.

It is the way of using the medium that makes the difference--and that depends upon the painter's intentions and upon his vision. It was Bellini's richer and wider vision that determined his future development. Oil paint is inclined to be the more transparent and fusible and therefore lends itself to richer colour and tone by allowing a further degree of glazing, the laying of one translucent layer of colour over another. It is this technique and the unprecedented variety with which he handled the oil paint that gives his fully mature painting the richness associated with the Venetian school.

Giovanni's brother Gentile was chosen by the government to continue the painting of great historical scenes in the hall of the Great Council in Venice; but in 1479, when Gentile was sent on a mission to Constantinople, Giovanni took his place. From that time to 1480 much of Giovanni's time and energy was devoted to fulfilling his duties as conservator of the paintings in the hall, as well as painting six or seven new canvases himself. These were his greatest works, but they were destroyed when the huge hall was gutted by fire in 1577. We can now only gain an approximate idea of their design from "The Martyrdom of St. Mark" in the Scuola di S. Marco in Venice, finished and signed by one of Giovanni's assistants, and of their execution from Giovanni's completion of Gentile's "St. Mark Preaching in Alexandria" after his brother's death in Venice in 1507.

Yet a surprisingly large number of big altarpieces and comparatively portable works have survived and show the steady but adventurous evolution of his work. The principles and the technique of the Pesaro altarpiece find their full development in the still larger Madonna altarpiece from S. Giobbe in the Venice Accademia, where the Virgin enthroned in a great apse and the saints beside her seem ready to melt into the reflected light. This seems to have been painted before the earliest of his dated pictures, the half-length "Madonna degli Alberetti," also in the Venice Accademia, of 1487.

While for the first 20 years of Giovanni's career the subject matter was limited mainly to Madonnas, Pietŕs, and Crucifixions, toward the end of the century it began to be greatly enriched not so much by the wider choice of subjects, which were still mainly religious, as by the development of the mise-en-scčne, the physical setting of the picture. He became one of the greatest of landscape painters. His study of outdoor light was such that one can deduce not only the season depicted but almost the hour of the day.

Bellini also excelled as a painter of ideal scenes; i.e., scenes of primeval as opposed to individualized images. For the "St. Francis in Ecstasy" of the Frick Collection or the "St. Jerome at His Meditations," painted for the high altar of Sta. Maria dei Miracoli in Venice, the anatomy of the earth is studied as carefully as those of human figures; but the purpose of this naturalism is to convey idealism through the realistic portrayal of detail. In the landscape "Sacred Allegory," now in the Uffizi, he created the first of the dreamy enigmatic scenes for which Giorgione, his pupil, was to become famous. The same quality of idealism is to be found in his portraiture. His "Doge Leonardo Loredan" in the National Gallery, London, has all the wise and kindly firmness of the perfect head of state, and his "Pietro Bembo" (?) in the British royal collection portrays all the sensitivity of a poet.

Both artistically and personally the career of Giovanni Bellini seems to have been serene and prosperous. He lived to see his own school of painting achieve dominance and acclaim. He saw his influence propagated by a host of pupils, two of whom surpassed their master in world fame: Giorgione, whom he outlived by six years, and Titian.

The only personal description extant of Giovanni is from the hand of Albrecht Dürer, who wrote to the German humanist Willibald Pirkheimer from Venice in 1506 ". . . everyone tells me what an upright man he is, so that I am really fond of him. He is very old, and still he is the best painter of them all."